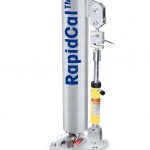 Traditionally, tank scales are calibrated using such different methods as flow meters, substitution, or test weights.  Using test weights is the most accurate way to calibrate a tank scale. But it isn’t always the most practical, especially at higher capacities. It is slow and costly. METTLER TOLEDO now offers a new way to calibrate tank scales: RapidCal.  This method offers an economical and fast calibration method that is traceable, and operates without using test weights or purified liquids, or the risk of scale contamination. 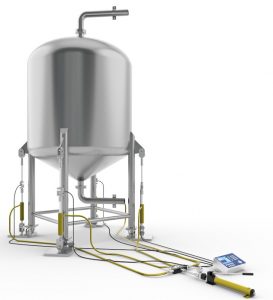 Instead of using test weights, or filling material in the tank, the downward force is applied by hydraulic equipment. The loading of the tank scale during RapidCal™ is the same as during normal operation, meaning piping influences, foundation deflection, and other mechanical influences are accounted for.

Tank calibration with RapidCal™ is much faster that other methods and takes only two to three hours, increasing your total production time.  You can schedule the tank scale calibration with the METTLER TOLEDO service team for a time when your tank is planned to be empty according to your own production schedule.

The calibration force applied by hydraulic cylinders is measured by highly accurate reference load cells whose calibration is traceable to test weight standards. RapidCal can test to full capacity, up to 32t, and accounts for any inaccuracies throughout the entire weighing range.  This is beyond the capabilities of test weight calibration methods.